My statue display is based on the BESTÅ (or BESTA) cabinet system from IKEA. It’s a somewhat modular system that can be combined in many ways to create a display system that suits your needs. For the ease of my international friends that may not have the letter “Å” on their keyboard – or don’t know how to pronounce that letter – I’ll simply call it “BESTA” throughout this article.

Important note: My BESTA frames are an older version. I am quite sure that IKEA still offer the BESTA frames, but the measurements may be slightly different and so may colors of the current versions. I have provided article numbers further below for each unit/item that I believe are similar to the ones I got. These numbers may be changed from time to time – if so, please let me know so I can keep this article up-to-date.

BESTA comes in different sizes. You can combine these sizes almost seemlessly. That’s what I have done in my display, and I think this sometimes confuses people since it’s not that easy to see what sizes I have actually combined.

The standard measurements for the IKEA BESTA frame are as follow:

To make things understandable, let’s imagine that the above specs is a standard BESTA frame. Basically what you can see in the image to the right.

So, let’s break down what I got. 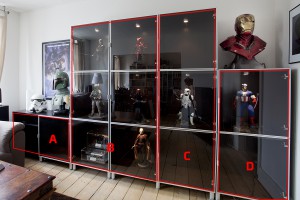 The above picture is a few years old, but it’s the same display. I just didn’t have that many statues back then. I’ve added some lines that illustrate the individual BESTA frames that I have set up next to each other. 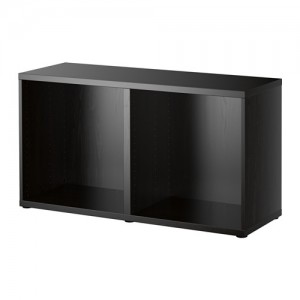 B: This is a twin standard i.e. it’s full height, but twice the width of a standard BESTA frame (47 1/4 ” or 120 cm). Since I am not able to find this frame on the IKEA website, I believe this to be discontinued. IKEA does, however, list storage combinations that are identical in size to this. They simple have exchanged the twin model with two standard BESTA frames. This is most likely because IKEA wishes to streamline their models and not manufacture a model that is essentially just two standard frames put next to each other. Therefore, this is the article number for a standard frame: 902.459.46. Price: $75 (or $150 to make up for a twin). 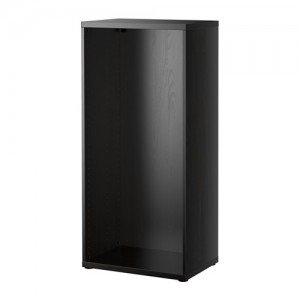 So, to summarize. IKEA seems to have discontinued the large twin, but instead you can get two standard frames and connect them (this is done with specific screws provided by IKEA). If you were to put together my display using the frames offered by IKEA today, it would look like this:

Let’s not beat around the bush. The glass doors I am using have been discontinued by IKEA! They are called TOMBO. The only way to get them today is by purchasing them second-hand. It is a huge shame since I find them to be beautiful. Especially for statue displaying purposes. I believe a reason that this happened was that ordinary consumers (and I say this with an attitude!) disliked the fact that you were able to see the door mechanism due to the thin profile of the metal frame. They were also very expensive, mind you. Here in Denmark they were priced at DKK 300, which roughly translates to $45 for a single door! I have 12 doors so that’s $530-ish just there. More than the total price for the frames!

GLASSVIK: This door more or less was released at the same time that IKEA discontinued their TOMBO doors. So one could call it the successor to TOMBO. It features a thicker painted profile. GLASSVIK (the black frame and clear glass) has the following article number: 302.916.58.

I use an integrated lighting system from IKEA called INREDA. Again, it would seem like these specific models are no longer being made by IKEA. However, they still offer various integrated lighting systems that can be used in combination with BESTA. So just look for what they’ve got, or ask them in the store. There’s not much to it, really. With the INREDA system you can connect multiple sets to each other, thereby expanding the number of lights that turn on/off using the same single switch. Each package contains all that you need to do this. So don’t worry about that. I’m certain that all new variations of integrated lighting offer the same in this regard.

The main things that you need to decide:

Important note: Always use LED lights! They can burn for hours and hours whilst emitting only a minimal amount of heat. This is important since the heat can have a deteriorating effect on your displayed objects – statues in particular.

I use a warm light since I find that it looks more cozy and gives my living room a nice atmosphere. 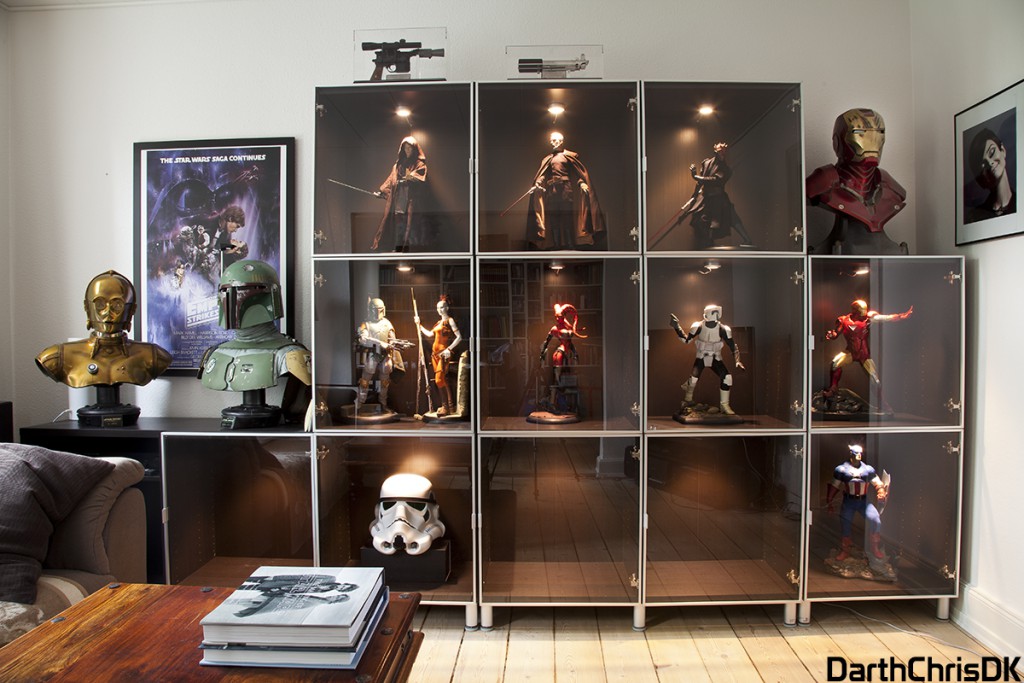 You can basically choose to have your frames standing directly on the ground without legs, or you can buy legs separately. I prefer the use of legs since this makes it possible to run cables and what-not underneath your display. It simply makes life easier. The ones I got are cylinder and made of metal. Don’t recall the name, and I can’t find them on IKEA’s website. Again, they might have replaced this model with something else. I suggest asking someone in the store.

I think I’ve covered almost everything now. As a statue collector, I hold much love for IKEA. But it is a real shame that they have chosen to discontinue many of their previous products. But they rarely do so without introducing a replacement instead. So, the options will always be available to us, but they may change their appearance and form over time. I therefore recommend that you think ahead, and think carefully on how you wish to design you display. Actually, when I got my display, I started without the medium-sized BESTA to the far right. However, I soon realized that my Iron Man bust felt cramped inside a case, and I decided to add the entire unit to the right, and placed the bust on top of it. I did that only a few days after buying the other frames. If I had waited for too long (we are talking more than a year) I might not have been able to get the same legs or the glass doors (or maybe even the same color frame).

So act with due diligence. Take measurements, draw a sketch, and think about what pieces you plan on putting on which spots. It’s actually a pretty fun process.

I hope this article will provide you with a solid foundation. If you have any questions, do let me know!

Oh, and before we go… Feel free to check out this video. My most recent tour of my display. Enjoy!