HMO Collectibles and the creative team behind Bounties of Bathos™ are finally ready to reveal the next character to join their line of statues. He is Crow King, the main villain of Bounties of Bathos. This highly detailed statue is a jaw-dropping 28-inch tall representation of the mysterious Bathos hunter and leader of the Sons of Conner. Crow King is yet another key character of Bounties of Bathos. Where Ren is the main protagonist of the story, Crow King is essentially the main antagonist. He comes with switch-out parts and lots, and lots, of details. Anyways, let’s not beat around the bush anymore. Let’s instead dive right into the juicy details of this awesome tech-beast. 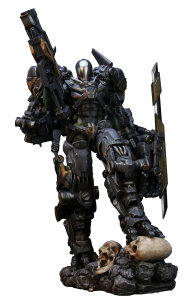 I don’t really know much about the story of Crow King. I know that he is a mysterious figure, the main villain, and he is someone not to be trifled with. He took part in the creation of the very first mech suits on Bathos, and he fought the Zectus. His character is generally shrouded in mystery, but hopefully, in time, we will learn more about him.

Hands-down… That sculpt.. It’s simply amazing. Over the past couple of weeks we’ve been teased a bit (I’ll see if I can find a picture) about the sheer complexity and detail of the sculpt of Crow King. Now that we finally see him fully assembled and painted, I’m left flabbergasted. The level of detail is beyond most of what I’ve seen before. This, to me, looks like a no-compromise piece where the design team has gone to great lengths in order to capture the grandeur and excessiveness of this character. It’s quite an accomplishment, to say the least. 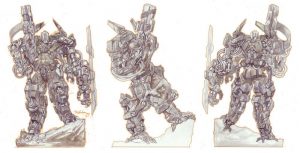 The Crow King is wearing an incredibly detailed exo-skeleton mech-suit. You can actually see the King himself in some places of the sculpt. The mech-armor gives him a huge and towering physique. The sculpt does an amazing job in conveying a feeling of brute force and raw power. The human-like features of the armor are excessive and exaggerated, but also come together in a balanced and wholesome way. 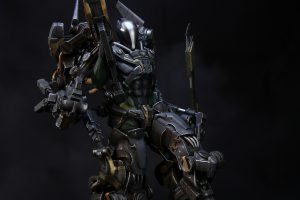 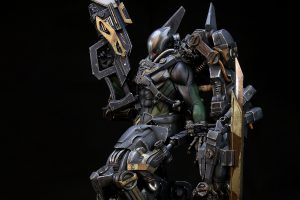 Anyways, this statue of Crow King is filled with so many details, I don’t really know where to start. I recommend that you simply click on the pictures and see it for yourself. There are tiny intricate details on the armor everywhere. The armor plating has a functional and believable composition. It is, in other words, really easy to imagine this character walking around. 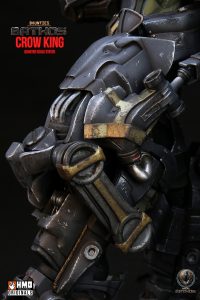 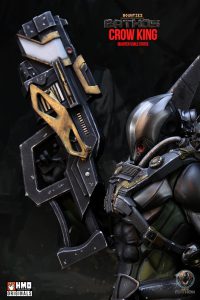 As it was also the case with Ren, I feel that there is a very good flow between the mechanical and biological parts of the sculpt. It’s a very organic design. When you look at the design, you sometimes forget completely that this is in fact an armor. I think this is very important when it comes to mech-pieces such as this. You should be both convinced that this is simply a tech-beast, but you should also, upon further investigation, be able to detect the true nature of this monstrosity, and what it is comprised of. You get that here.

From what little I know about Bounties of Bathos, I’m gradually getting a clearer and clearer sense of the universe. Crow King, I believe, is the embodiment of what this universe is about. It’s a tech-heavy gasoline-fueled world that boasts a weapon-centric dystopian future where ruthlessness thrives and survival is a rare commodity.

Once again, we have one of those magnificent museum-like poses that I just adore. It’s simple. It allows for the design to speak for itself. With this level of detail, it would be redundant with a dynamic pose. Sure, it would probably please a lot of collectors, but I feel that it is unneeded here. A resting, static pose such as this gives me a feeling of confidence. Both in terms of the attitude of the character, but I somehow also feel that it is the creators of this piece telling me that they feel confident that they’ve created something truly remarkable. Also, this pose is perfect when it comes to displaying it along with Ren. I love the fact that the creators of this piece are thinking “big picture” like that. It’s important to maintain a thematic continuity in terms of display expression. 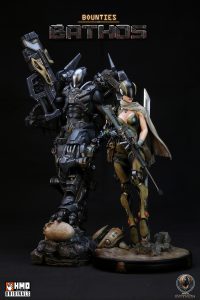 The base is pretty simple. Again, it sticks to the “standard” that we were introduced to with Ren. It’s simple, yet effective. It stages the piece in terms of scenery and atmosphere. It adds to the feeling of roughness and harshness that is a key element in the world of Bathos. I think the base seems smaller than it actually is. This is a massive piece, after all, and a piece of this size requires a large base. I’ll show you a photo below that gives you a “hands-on” (pun intended) impression of the size of this piece. It’s very impressive. Obviously, the base for this piece is going to be massive. 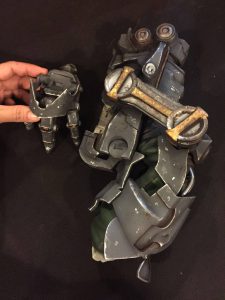 The skulls on the base look very well detailed. Again, they are an efficient means to communicate the tone and atmosphere of this piece. Now, I don’t know how often you run into folks posing on top of a pile of skulls. If, however, you did, I’m sure that you would be struck by an uneasy feeling. Right? Oh, and if you look closely, the skulls seem elongated. Clearly, they are also rather large. I guess this might be our very first glimpse of the alien Zectus? Crow King fought them, after all. Oh, how exciting this all is!

Not surprisingly, I’m very impressed with this piece. By the looks of it, it just seems like such an accomplishment. It’s more detailed than any 1/4 statue that I can think of off the top of my head. It contains all that was “promised” with this line of premium statues. Form and function, joining together in such an amazing way.

I think what makes this piece this impressive is the fundamental design that defines this statue. Clearly, a lot of work and effort has been put into the very early stages of character design. It’s a piece that when you look at it, you can almost sense the amount of man-hours that must have gone into conceiving this character design. All those tiny intricate details. Everything seems like it has been carefully thought-out. 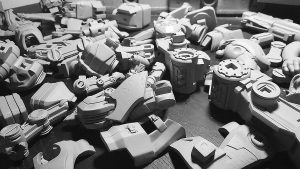 Collectors often forget (or simply don’t know) what careful planning and designing is involved when putting together a piece – and especially a complex piece such as this. It’s an engineering feat to say the least. Ask any sculptor, and they’d agree. One thing is to draw up, and sculpt a large statue, but splitting it up in individual parts so that it can be painted, assembled/disassembled, boxed and shipped securely. This takes a lot of time and skill as well.

When I look at Crow King, I’m impressed, but not only by the statue as an assembled marvel. I get a sense of the craftsmanship, on all fronts, that must’ve gone into the creation of this piece. It’s just a very impressive and admirable accomplishment. This really goes for all producers of high-end premium statues out there. The creativeness and craftsmanship that goes into this hobby is truly exceptional. We, as collectors, often just forget. Well, this piece reminds of these practices indeed. It’s a wake-up call that reminds me why I love this hobby.

This piece deserves all the attention it can get. It’s an unusual piece made by a team of talented artists. It really shows in all aspects.

Bounties of Bathos is truly shaping up to be something very special. Looking at these pieces (Ren and Crow King), it really seems like the visionaries behind them are putting everything they can into this line. So far, it still looks extremely promising, and it seems like the community is taking this line of collectibles to heart. Ren sold out in one day, which is very impressive since this is an entirely new and never-before-seen universe.

I think that basically wraps up my review. I can’t wait to see more of this piece. I’ve got some pictures, and I’ll throw them in below. Also, check out my write-up on Ren and my interview with Dani Hinze, the creator of Bounties of Bathos.

Learn more about the world of Bathos via the official website: http://hand-made-object.com/bathos 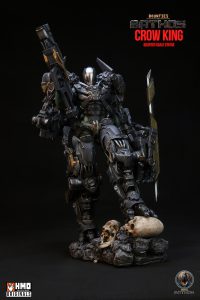 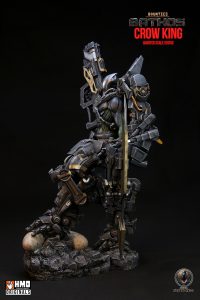 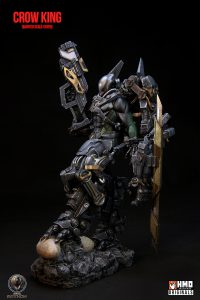 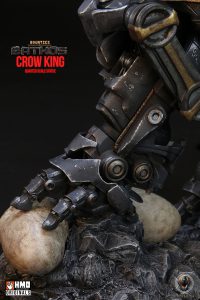 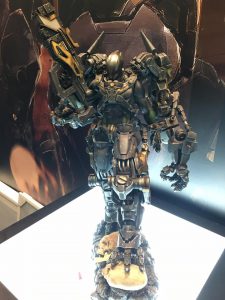 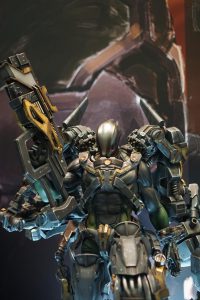 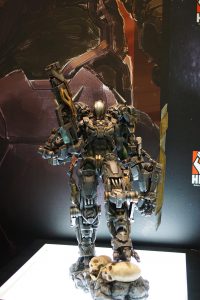 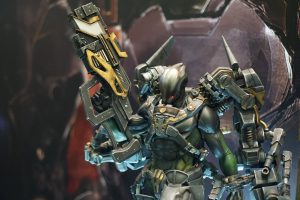 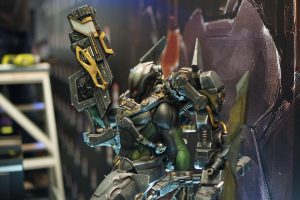 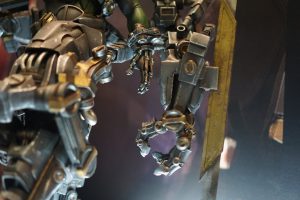 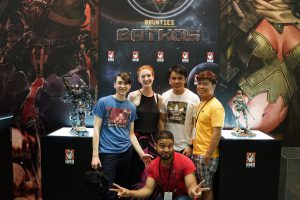 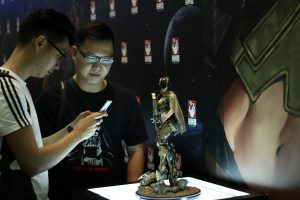 My Thoughts on… Ren Quarter Scale Statue (Bounties of Bathos)