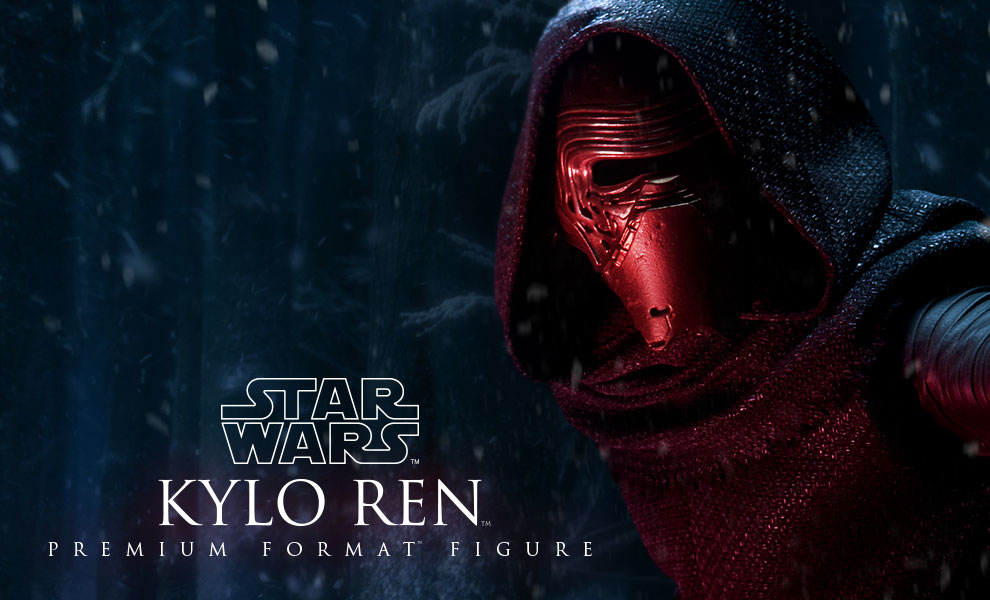 Sideshow Collectibles has revealed their coming Kylo Ren Premium Format Figure and I will now give my initial thoughts on this piece based on the material currently available. This should not be considered a review, but rather as my first impression of the piece. 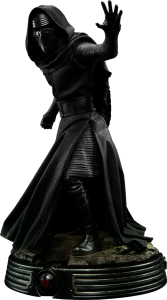 The first Premium Format that was announced in the wake of the most recent Star Wars movie is now available for pre-order on Sideshow’s website. I absolutely loved Kylo Ren in TFA. He had a nice youthful vibe, and his passion and hatred was well portrayed by the actor, Adam Driver. So, what’s the deal with this Premium Format? Does it warrant the price-tag? Let’s have a closer look.

Right, so the sculpt… It’s actually kind of hard to make out since Ren is almost covered entirely by fabric. His face/helmet, arms and left leg are visible (including some of his inner garment thingy on his legs). Well, the details here seem pretty good, and accurate. I’m not sure about the actual screen accuracy, I’m sure there are some hits and misses. I’ll not focus too much on that since I think he looks pretty good. 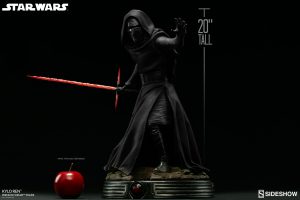 The fabric parts are very well made, and the texture of the cloth parts looks quite accurate or reminiscent of the screen-worn outfit. There is a nice wax-like shine to the fabrics which is great at bringing out the details of the texture when displayed with proper lighting. That’s cool. I must say that the tailors did quite an impressive job with this statue. Apparently they used an “eight pass printing process” in order to achieve the screen accurate textured pattern. I don’t really know what that means. I guess something passed something eight times and ‘voila’ – screen accurate! 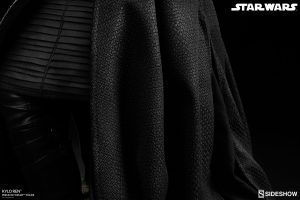 The helmet looks very nice too. Again, not sure about accuracy (I’m sure some of you hardcore nerds care a lot about that), but I think it looks pretty accurate. I really like the unique design of Ren’s helmet. It is very reminiscent of Revan’s helmet (from KotOR). It looks very intimidating and goes very well with the Sith-robe. 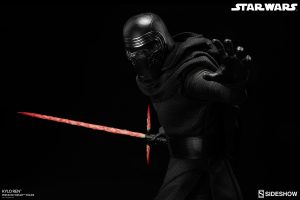 Well, the pose makes sense. I wouldn’t say that it is really impressive or anything, but it does fit the character very well. It reminds me of that scene in the final act of the movie, and also of the cut scene that was shown in the very first teaser trailer. 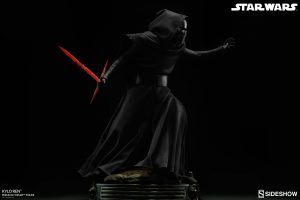 It manages to capture the forceful nature of Ren quite well. His left arm is raised in an aggressive fashion that illustrates his command of The Force. He looks aggressive and dangerous. It’s all good – it’s all good.

Right, this is when I am going to air my first points of criticism towards this piece (more to follow further below).

As I said, it looks like this piece is based on some rather specific scenes from the movie. What I don’t get is why there is no snow on the base then. It’s as if he is standing on an entirely different planet, and that kind of confuses me. I’d personally have preferred if the piece was even more representative of that scene that it already reminds me of, and that would have been achieved with some snow. Maybe I’m in the wrong, I don’t know! 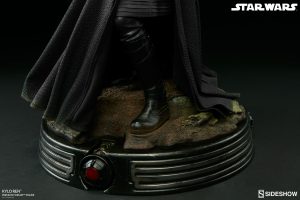 Apart from that, the base looks pretty good. It’s substantial and looks solid. The display base is rough and worn, and it looks very good. I feel that the display base compliments the rest of the piece quite nicely. It’s also simple, and not too tall and distracting. It gives the piece a bit of compactness, which you already know that I appreciate. 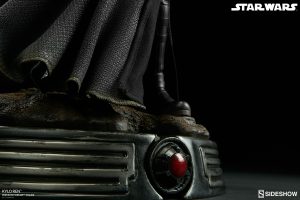 In my following paragraphs, I’ll touch on some of the points that I have noticed have been discussed within the community when it comes to this bad-boy. Let the WALL OF TEXT BEGIN! If you make it to the end, you deserve a hug.

It has previously been stated that this statue will not feature any light-up functionality. This has been the cause for some distress among members of the statue collecting community since they see this as a fundamental requirement for a piece of this nature. 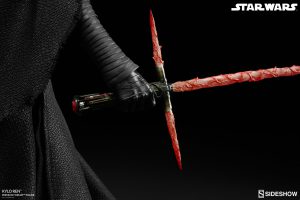 Well, let me be clear. I have owned a lot of pieces with light-up features. I still own some pieces that have light-up. How do I feel about light-up? I hate it. Don’t get me wrong… it looks absolutely awesome on some pieces. My reason for disliking light-up features is that you are basically introducing a feature that will eventually stop working. I have experienced this myself. Light-up features can for whatever unknown reason stop working over night. On top of that, a malfunctioning light-up feature introduces the risk of having a “malfunctioning” statue – essentially, a defective statue. It sounds completely silly, but that is really what it is, and it is an objective truth that a defective statue is devalued on the aftermarket.

You get my drift by now, I think…

I can sincerely sympathize with those collectors that want light-up for a piece like this. I’m not one of them myself, but I get it. It looks great at night, in a low-lit room/display to turn that thing on and *boom* Sith! But my concern for defective functionality by far out-weighs the positives of a light-up feature that I hardly ever use in the long run anyways.

HEY! THIS IS JUST MY OPINION!

What’s up with the Exclusive?

I have to admit that the exclusive bit for this piece is very, very underwhelming. So, the regular piece comes with a lightsaber. Not just any lightsaber, though. The friggin’ awesome cross-guard lightsaber of awesomeness. Who in their right mind would ever opt to switch this thing of absolute beauty out with a plain fist? Sure, you get a lightsaber hilt that can hang from the belt… But this in no way makes up for what you are missing. That lightsaber is THE most iconic and memorable artifact for this character, and that thing needs to be seen! 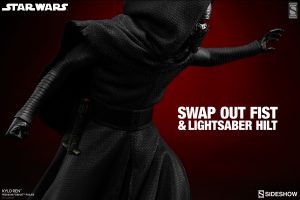 I really, really feel that they should have gone with a secondary portrait for this statue instead. Give us Adam Driver’s angry face. It was a key moment in the movie when he was unmasked, and we saw his face, as well as his emotions and reactions throughout the movie. It defined the character, and collectors should of course be able to display Ren like that as well. Besides, the scene that this piece conveys had him unmasked as well. Mr. Driver has some amazing distinct facial features, and I’m sure it would have been a fine and interesting challenge for s sculptor to capture his physical appearance.

For the first time, I’ll actually discuss the pricing of a piece in a write-up. Why, you ask? Well, I feel it’s about time to do so.

First of all, I have no inside-knowledge regarding the pricing of pieces, and what dictates that a piece hits a certain price-mark etc. All I have is my brain, my feelz and my empty wallet.

So, this piece sports an astounding price of no less than $569.99. Since I live in Denmark, I’d have to pay a total of $669.99. On top of that, you’d have to add customs. That is around 25% on top. I’m not even going to finish that piece of math since I’m already starting to feel a bit nauseated. 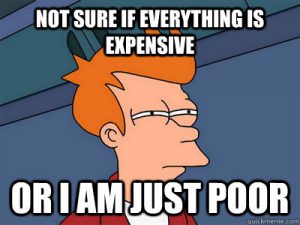 I don’t know why prices are moving up like this. They’ve been doing so for the last couple of years. This is an all-time high for a piece this size. I don’t know if it’s the heavy use of fabrics that require more man-hours to complete, or what it is. I’m curious when Sideshow feels they’ve reached a price-level that they feel comfortable with. It’s just frustrating to see how prices are climbing like this. I mean, if you compare this piece to other pieces (some of which haven’t been released yet), there’s really no apparent logic behind the prices. So, two pieces that may have the same size/dimensions, same level of detail, both haven’t been released… The price difference might still be around 30% between the two. How!? Why!? Is it really because the license is crazy expensive when it comes to Star Wars?

Okay, I’m sorry about the wall of text above. Just had a few points I needed to make. I really like this statue. It is a great representation of the character. It looks and feels like Kylo Ren. It really does. But I think it’s totally fair that the community is reacting the way it does. Especially when it comes to pricing. The price of a piece needs to make sense. Sure, we don’t have full disclosure, and we don’t know what may be the reason behind the pricing of a specific piece, but at the end of the day, it is our money, and it’s a really hard sell, and I’m really not convinced in this case, that the piece warrants this price.

I feel that Sideshow has a task in front of them. They need to tell me why I should pay this much for a statue of this caliber. There’s a story there that hasn’t been told. Show me the production steps. Show me the tailors working their collective buttocks off in creating this piece. Show me Adam Driver holding this piece up in the air like a trophy – Hey, even better, throw in Adam Driver’s signature on a display plaque.

Let’s see something new. It’s getting a bit boring and repetitive, but prices are still going up. You can’t up the prices like this and not give customers the feeling that they are getting what they are paying for. It’s like Sideshow is just sticking to the same formular, but prices are going up for no apparent reason.

Anyways, I think I’ll end my discussion on this piece here. To summarize very quickly:

Thanks a lot for making it this far. Please leave a comment if you liked this article, or wish to share your opinion with me. Maybe you disagree? Let me know. I’ll pretend like I care!

Have a great day, and May The Fourth be with you. 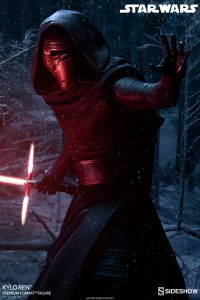 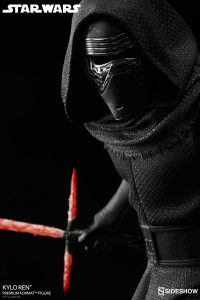 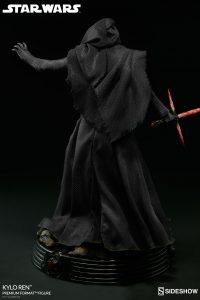 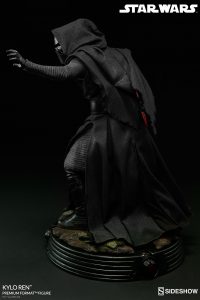 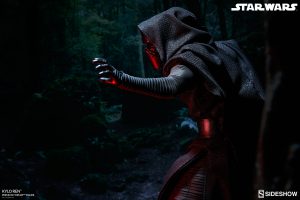 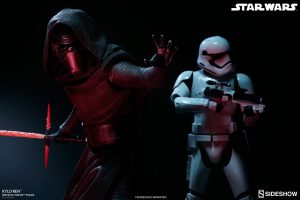