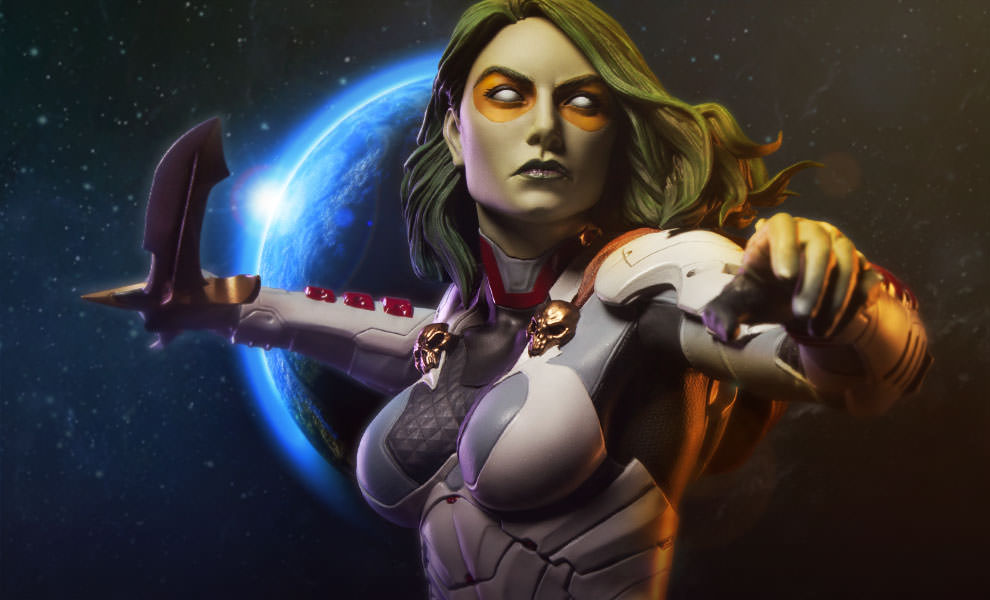 Sideshow Collectibles has revealed their coming Gamora Premium Format™ Figure and I will now give my initial thoughts on this piece based on the material currently available. This should not be considered a review, but rather as my first impression of the piece. 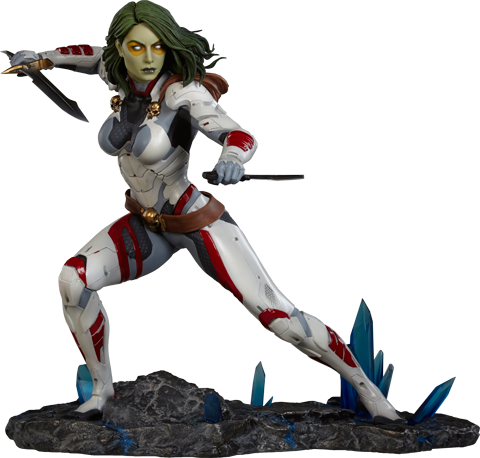 Gamora is the daughter of Thanos and most people probably know her today as being a member of the Guardians of the Galaxy. She’s definitely one of my favorite characters from the cosmic side of things at Marvel, and I’m pleased to see Sideshow Collectibles really making a move into the cosmic realm. So, let’s have a look at this upcoming Premium Format Figure.

Gamora is wearing her remarkable white battle armor. It flows perfectly with her body and gives her a very modern and futuristic look. At the same time, it offers a lot of smaller details for us to behold and admire. The suit is overall pretty simple, though, with a relatively simple color palette of white, red and shades of grey (no, don’t even think it!). It provides a stark contrast to her green skin and hair, and the gold skull-decor. This adds a nice flavour of old vs new. You get a sense that she has a background and that she comes from a place that has a history. Overall, the body is sculpted very nicely, with nice flowing lines and a good mix of smaller and larger sections of armor coming together in creating a very believable composite armor. 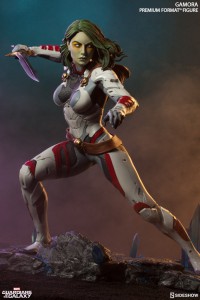 The hood that she is wearing on her back further emphasizes her background as an assassin, and it also adds nice flavour to her elsewise somewhat generic futuristic appearance. 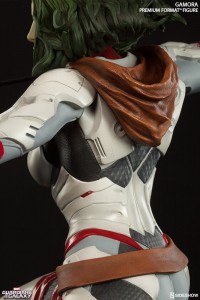 Her face is beautifully sculpted and it is one of the key features features of this statue. Her features are very perfected and it’s a very attractive sculpt that you can’t really put a finger on. It’s just beautiful. She’s got a serious face on, and you’d probably think twice before walking up to her and throwing pick-up lines. Her flowing hair is nicely detailed, and I like the angle it takes towards the back. The green skin and hair, and the yellow around her eyes, really makes the statue pop. 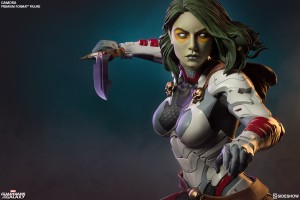 I am a bit ambivalent towards the pose. I generally like the stance, but it could have been more interesting. If the base had been more vertical I could imagine a pose similar to this, but incorporating some form a verticality to the presentation. It could have been a cliff formation that she was leaning against, or had just landed on, and she could be in the middle of jumping at her foe again. When she is standing on a flat base like this, it kind of reminds me of miniature figurines, and it simply isn’t the most interesting of poses. She’s an assassin, and in that sense, I’d love to see her challenge gravity, physical flexibility and martial arts even more. With all that said, let me stress that I generally find the pose to be very solid, and it does manage to communicate many of the aspects that I mention. It’s also a fine balance between making a complex pose and a pose that allows us to see her properly without being to convoluted in some areas and impairing our view. This pose allows us to see all details of the sculpt very well. 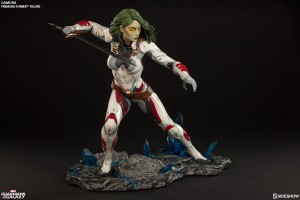 There’s really not much to say about the base. She’s standing on an alien planet, and you can tell from the strange blue crystals protruding from the rocky but metallic looking surface.

The base is flat, and it doesn’t really interact with the character. Both of her feet are on the same level, and the added details of the base are inconsequential to the character and solely serve to frame the setting of the piece. As mentioned earlier in this writing, it would have been lovely to see the base possess a more vertical quality and have that interact a bit more with the character.

Other than that, the base, as it is, is nicely detailed, with a satisfying paint application. 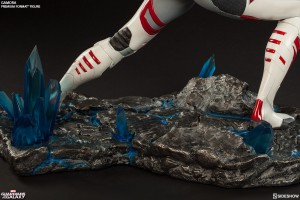 The extra tactical knife fits the sculpt 100%, and honestly, it feels like the pose was made for this. Actually, it looks more natural to the pose than just the unarmed hand. So I suppose I feel that it is kind of a must, not because it adds a whole lot of extra value to the piece, but because it perfects the sculpt. I’d prefer if the exclusive had come with the regular, and something else had made up for the exclusive, but at this time, I don’t really know what that could’ve been. 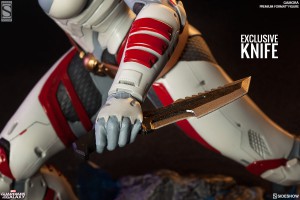 As I said in my introduction, it’s really nice to see Sideshow Collectibles really getting into these cosmic characters. It makes me very excited about what the future might have in store for us – particularly the rest of the Guardians (including Iron Man).

I know that many would’ve preferred the previous look of Gamora, but Marvel has the final say, and I bet that they prefer a more current version in order to support their comics today.

This piece is a solid representation of Gamora. The sculpt is very good, with lots of nice details on the body, and a very strong portrait. The base kind of leaves me with something to be desired, and I really feel that the overall pose would’ve benefited from that as well. I love the green skin of Gamora, and she really pops with this white suit too. If you are a really big Guardians of the Galaxy fan, and will get all the cosmic characters that are bound to come, I think you will be able to achieve a fantastic display. The cosmic characters are so colorful and diverse. It will look amazing, and Gamora here, will fit right in. As a stand-alone piece, however, I feel that this piece could have been more impressive. Mostly from a design perspective, for the execution here is still very solid.