My Thoughts On… Skeletor Statue

Sideshow Collectibles has revealed their coming Skeletor Statue and I will now give my initial thoughts on this piece based on the material currently available. This should not be considered a review, but rather as my first impression of the piece. 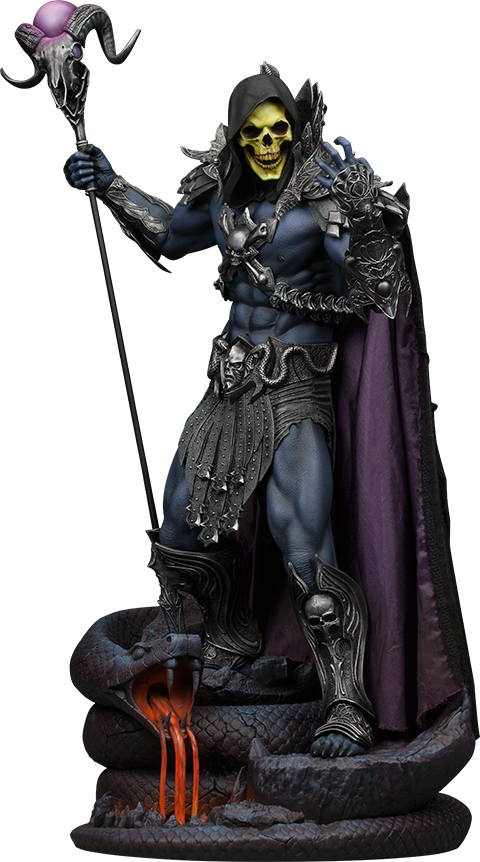 Skeletor is probably one of the most beloved villains out of the 80s cartoon classics. Many of today’s collectors grew up watching Masters of the Universe and this particular villain therefore holds a very special place in their nostalgic hearts. The question is, will this statue only be relevant to sentimental collectors reminiscing over their childhood, or does it have more to offer? Let’s find out!

Let’s get right down to brass tacks. The sculpt of this statue is a definitive selling point! What I like about this concept is that Sideshow has taken the concept of Skeletor, and delivered him in a mature and grown-up fashion. I mean, he sure has come a long way since… this: 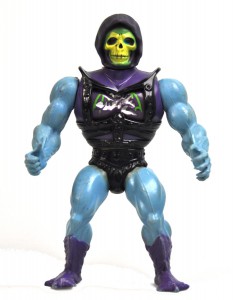 Anyways, by delivering this version of Skeletor, Sideshow is reinvigorating the whole MotU-franchise and throwing a love-letter directly in the kisser of nostalgic fans. I love that, since I know a lot of fans will be excited and happy and that puts a big smile on my own kisser.

First and foremost, the ornately sculpted battle-armor looks really impressive. The level of detail here is amazing. It looks ancient. It looks authentic. It even looks quite evil! The paint application (on the prototype) makes the armor really stand out, but in a subtle way that simply adds to the overall impression of the piece. 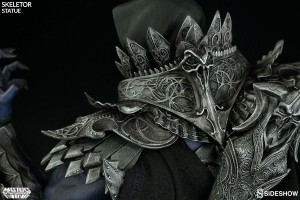 The delicate patterns and tiny details really stand out, and I can’t immediatly recall when we’ve seen something like this in a recent statue release by Sideshow.

The muscle definition is… defined. It looks very typical with some nice shading. All the ornamented parts as well as the hood and the cloak (which is fabric) makes everything come together in perfect terrifying unison. I like the claw-like hands and feet. Along with the obvious skull-head these parts bestow him with a demonic quality that is as repulsive as it is fascinating. 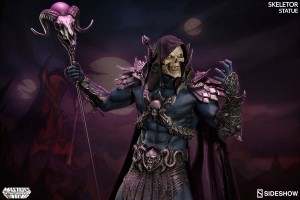 I really like the portrait as well. The skull looks menacing, and I’m astounded by the details that are going on here. Of course, this is also carried a long way by the superb paint application of the prototype, but the sculpt really lends itself to a good paint application. I like the choice of colors here as well, which makes the skull look ancient. Almost like something that Indiana Jones would be likely to stumble into in some underground tomb.

Since the exclusive is an alternative portrait, I’ll go right ahead and squeeze that in here, already. The exclusive head gives collectors the option of displaying the statue with a portrait that is heavily inspired by the cartoony look of Skeletor (see the toy above too). In my opinion, this is a very solid exclusive, and I’d definitely recommend that you get that as well. I’m positive that a lot of collectors will even favor the exclusive head over the regular one, which I can totally understand. It makes him look even more iconic, and reminiscent of his old-school appearance. The dark and hollow eyes are just haunting, and the greenish color of the skull fits the color template perfectly. 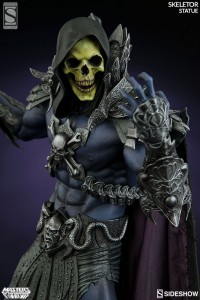 The pose is good. It’s a static pose and I think that fits a villain like this the best. He’s like the evil mastermind, and the pose somehow expresses his villainous and conniving nature. He really looks like someone who desires to become the Master of the Universe. So, in short, I probably wouldn’t change a thing about the pose. It’s ideal. 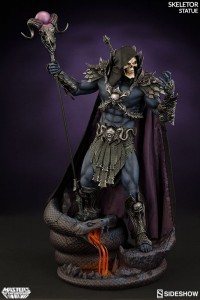 Skeletor resides on Snake Mountain. Need I say more? Hehe, well, the base seeks to frame the statue in a setting that is “natural” to the character. The obvious choice for a villain is of course said villain’s base of operations. Sideshow has managed to do so by adding a mean looking snake to the piece, and instead of poison running out of the snake’s mouth, you get VOLCANIC LAVA. So, there you have it… Snake Mountain! I’m starting to sound like a broken record at this point, but I really like this, and I can’t, off the top of my head, think of anything that would have fitted this piece better. I think this is really ideal and well executed. 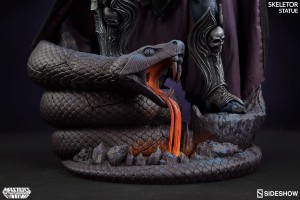 The base is neither too big nor too small. It’s well balanced with the statue (which is quite rare from Sideshow these days), and I’m glad to see it. A good base should be interesting on its own, but its greater purpose is to support (not just physically) the character on top of it. This base manages to do so in an aesthetically pleasing way, and it adds flavor to the overall design.

At this time, I suppose it can’t come as a surprise that I really like this statue. I like the concept and the execution. I like the fact that Sideshow has taken the idea of Skeletor, and upgraded him to a contemporary and modern version that will speak to fans old and new, and of all ages.

I found it a bit confusing at first that this is not a Premium Format Figure (quarter scale). It does feature mixed media, but I reckon that this statue will be a bit smaller than a quarter scale statue. But don’t be fooled. It will still be a big and impressive statue. Just think about the Mythos statues by Sideshow. They are actually quite big!

I like the use of mixed media here. It adds to the realism and authentic expression of this piece. Sideshow also states that this statue will be a mix of polystone and PVC. I’m sure that some of you will now make ticks because I mentioned PVC. At this time, we don’t know which parts of this piece will be PVC. I’m guessing that it is the staff (Havoc Staff), but I don’t know for sure. Oh, did I mention that the cloak is removable?

So, to wrap this writing up. The Skeletor Statue by Sideshow Collectibles seems to be a very carefully designed statue that offers a lot of details and a great use of mixed media. It appears that it delivers on all parts. The sculpt, the pose, the base… even the exclusive seems like a must-have. If you are, or were, a fan of MotU, I think this is just the statue you need in your collection. Even if you’re not a MotU-fan, this seems to be a solid statue to own from an execution and conception stand-point.

That’s a thumbs-up from this collector! 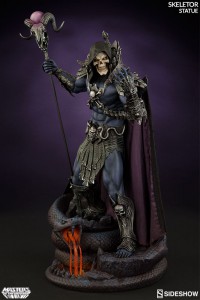 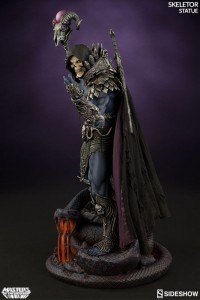 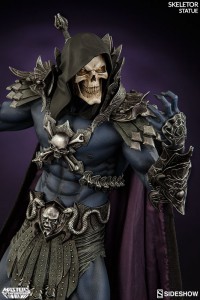 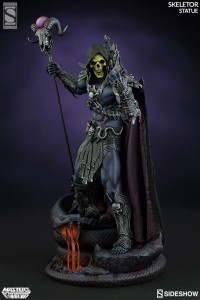 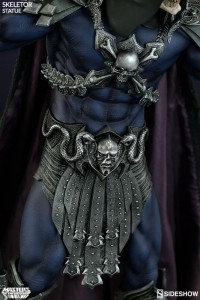 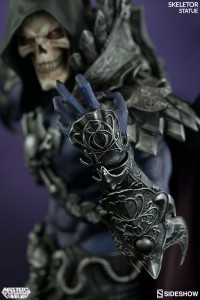 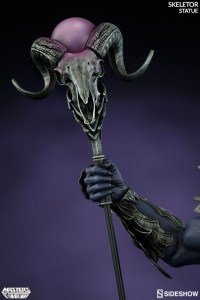 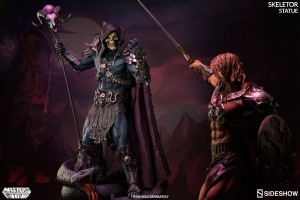 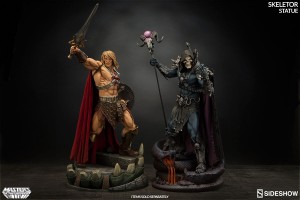